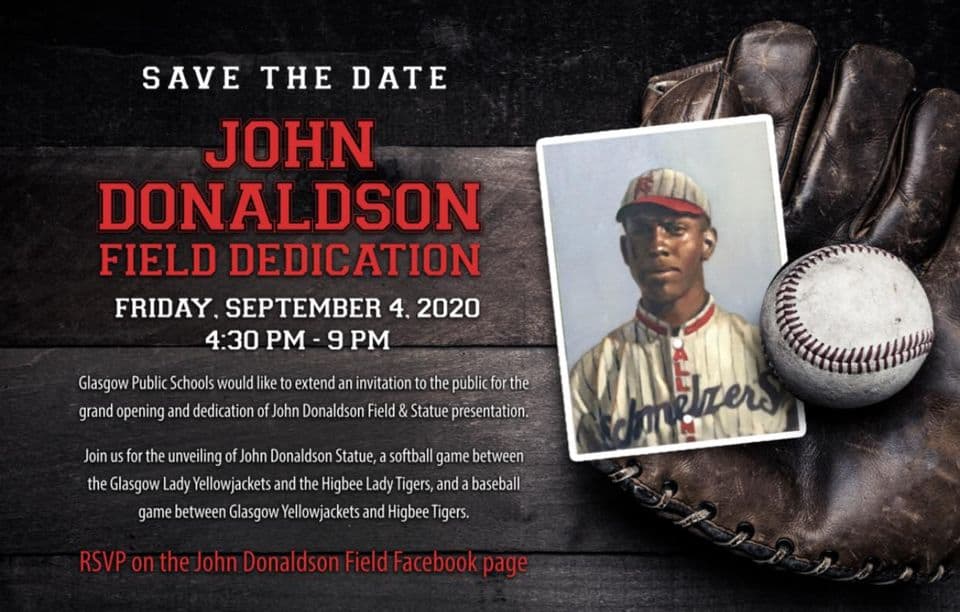 John Donaldson was one of the greatest black baseball players in history. However, not many know his name. To honor his memory, we are holding a statue unveiling this Friday, September 4th at 4:30 PM at Glasgow High School. After the unveiling, the Glasgow softball and baseball teams will be playing to celebrate his legacy.

Why You Should Attend

John Donaldson drew sold-out crowds for almost three decades. He had some of the most impressive statistics, but yet he died without making it to the Hall of Fame. We want to make sure that his hometown of Glasgow, Missouri honors his memory and amazing baseball career. He is an important part of, not just the history of baseball, but of Glasgow. It is our honor to pay tribute to the legacy he left behind. We invite the community to be a part of our historic dedication event.

Our hope with this historic event is to:

Many attribute Donaldson to be one of the most significant players in both black and Negro Leagues history. He is one of the early-era players who was a star in the Negro Leaugues during the 20s. He was a one-of-a-kind player both on and off the field.

Donaldson played in 683 cities in 25 U.S. states and Canada. In his prime, he pitched for the All Nations team founded by J.L. Wilkinson. He played for six seasons, recording 2,332 strikeouts and seven no-hitters.

At the end of his career, Donaldson had proven himself to be one of the greatest pitchers of all time. Here are some of his most notable statistics:

We are excited to see our community come out to support our statue unveiling and field dedication event to honor one of the greatest baseball players in history! RSVP to the event here.

« How to Cut Galvanized Steel
Galvanic Corrosion: What is it? How to Prevent it? »